On the 25th of February 2020, over 70 people from law, academia, trade unions and NGOs assembled for CORE’s Annual Partner Meeting at The Foundry in London.

The room was buzzing with energy for the future of the corporate accountability movement, and an appreciation of the work of Director Marilyn Croser — who is stepping down after eight years.

This blog post summarises key conclusions and reflects on opportunities in 2020 – and beyond – to achieve meaningful change.

The Environment and Human Rights post-Brexit: Trade First or a Trade-off?

In the wake of Brexit, striking trade deals will be the priority for Government – which is both a challenge and an opportunity for civil society organisations working to make sure that businesses respect human rights and avoid environmental damage.

Ali Torabi from the TUC emphasised that the Government’s large majority creates an unrivalled ability to avoid scrutiny. This has the potential to open the space for a “race to the bottom” on workers’ rights, after 40 years of cooperation with the EU.

The Government has indicated that it will not continue to align with EU standards on labour rights and the environment. Ruth Bergan (the Trade Justice Movement) explained that pressure to negotiate a US trade deal risks putting corporate freedoms first and environmental protections second. Trade deals should be scrutinised by Parliament and include legally binding ways to protect the environment from damaging corporate practises – but the situation is “shockingly bad”.

Ruth Chambers (Greener UK) gave a more positive view, illustrating that the Government has expressed its ambition to lead globally on environmental protections and has introduced the Environment Bill to achieve this.

There are, however, opportunities to curb corporate power. Jacob Millen-Bamford from the Brexit Civil Society Alliance encouraged civil society to explore ways of influencing the developed administrations and local government, over Westminster. Intelligence gathering on new Conservative MPs representing former Labour constituencies is also important; especially as there may be tensions between staying loyal to the Government’s free-trade focus while serving hard-hit constituents.

The Fight for Climate Justice: Ecocide, Equality and Economy

In a wide-ranging discussion, panellists explored the links between human rights, inequality and the effects of climate change. 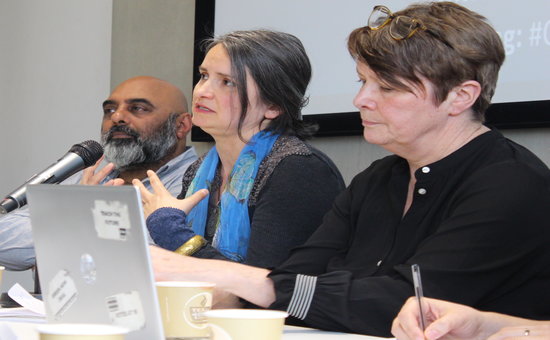 Jojo Mehta (Stop Ecocide) has been working to have ‘ecocide’ recognised as an international crime. This would be a significant step towards climate justice, creating an internationally binding duty of care towards the earth. Jojo also argues we still need domestic criminal law enforcement measures which have financial and reputational costs for businesses.

Some UK companies’ practices are reinforcing globally inequality, argued Asad Rehman, Director of War on Want. Asad noted that climate impacts and economic impacts are felt in the same communities in the Global South, where human rights are undermined by patterns of extraction that replicate Britain’s imperial past. Shona Hawkes (Global Witness) also illustrated that the human rights abuses experienced by those fighting illegal deforestation are tied to the UK’s financial sector.

To address these issues of inequality and human rights, Asad stressed that the need for a holistic political vision which reconsiders who has the right to extraction and why. Our society also needs to support communities in the Global South who are often at the frontline, according to Shona.

Hannah made it clear that in the UK, outreach with vulnerable socio-economic communities will increase support for the Green New Deal.

Barrister Tim Cooke-Hurle (Doughty Street Chambers) presented on his work with Client Earth on their complaint against BP. The complaint – to the UK National Contact Point on the OCED Guidelines – argued that BP’s advertising had breached the Guidelines by deceiving consumers about their expenditure on low carbon energy, which is marginal compared to hydrocarbons. BP has now withdrawn the ads.

The day brought light to the progress on human rights and environmental due diligence legislation across the EU and made clear what can be achieved at national, regional and international levels. 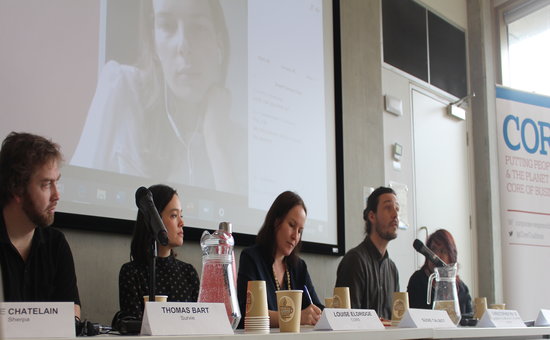 Chris Patz (European Coalition for Corporate Justice) outlined France’s ‘Devoir de Vigilance’ law in France and proposed laws in the Netherlands and Germany which we hope are soon to follow – but stressed that the goal is harmonisation across the EU. The EU Commission’s recent report on supply chain due diligence expressed that the regional legal landscape does not provide coherence for businesses about human rights and environmental due diligence obligations.

Thomas Bart (Survie) described the case against Total brought under the French law. Total’s mega-oil project in Uganda threatens the environment and human rights – especially the rights of local people to own their land.   Unfortunately, the case has now been referred to France’s Commercial Court, which tends to favour business interests.

Thomas and Lucie Chatelain (Sherpa) discussed experiences to date with using the French Duty of Vigilance Law to hold companies to account. Lucie brought attention to four major obstacles: 1) identifying which companies are covered by the law, as there is no public list; 2) company vigilance plans are often limited and lack transparency; 3) it is difficult to secure enforcement and liability; 4) case law on a variety of pending legal issues must be consolidated.

In the UK, we should implement “Duty to Prevent” laws, according to Louise Eldridge (CORE). Companies should be legally responsible for preventing environmental damage and human rights abuses in supply chains and operations. And, legally accountable for when they fail to do so – otherwise, companies won’t change. This is no “silver bullet” – but an essential start.

Looking internationally, Dorothy Guerrero (Global Justice Now) highlighted the importance of the process to develop a UN Treaty on Business and Human Rights – a binding international instrument treaty applied to Transnational Corporations (TNCs). These corporate entities cause the most harm in the Global South, argue GJN and their partners in the Treaty Movement, and corporate obligations under International law have the potential to make TNCs accountable to the international community – not only to nation-states.

In a Q&A session, Prof. Robert McCorquodale addressed major questions surrounding legislation on corporate accountability: including if legislation should be incorporate civil or criminal sanctions; if prevention should be prioritised over resolving existing corporate damage; and what information corporations should be allowed to rely on to defend themselves over failures to conduct human rights due diligence.

We had great feedback on the meeting from participants. Our work is important for “bringing together all the different NGO’s” (Rosa Polaschek – Oxfam), is vital for hearing a “range of voices” (Shona Hawkes – Global Witness) and “linking them with the international community” (Thomas Wills – Traidcraft Exchange).