AnalysisComment posted: November 9th, 2022
by Mark, Mark Dearn is the Director of the Corporate Justice Coalition.

At the end of October, I represented CAFOD at the United Nations (UN) in Geneva, Switzerland, where countries around the world were meeting to try to agree on a new UN Treaty to create binding rules to stop companies around the world from exploiting people and damaging the environment.

CAFOD has for years been calling for tougher rules for companies to stop them profiting from deforestation, modern slavery, pollution, land grabs and attacks on human rights. Companies are able to get away with this because of their complex structures, with supply chains that stretch all over the world, and often operating through smaller companies overseas that they own or have a stake in (subsidiaries). We’re working with partners who are supporting communities impacted by big business – some of these case studies are in CAFOD’s report on Land and environmental human rights defenders in Latin America.

I was in Geneva with colleagues from our European partners CIDSE, as well as with partners from the global south.

Viviana Tacha, Director of CAFOD’s partner Siembra in Colombia, joined us to outline the importance of a Treaty for communities defending their right to say “no” to a huge gold mine which an international mining company intends to build on their land. Viviana shared that: “A Binding Treaty is really important: it could address the challenges that we face, as well as being of symbolic importance.”

Father Vincent de Paul from RECOWA, the Regional Episcopal Conference of West Africa, also joined us, stating in plenary: “The crisis we are facing in Africa, and West Africa in particular, are the results of the hegemony of profit over human rights and dignity.” 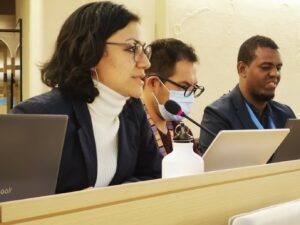 In a really powerful moment, Marina Oliviera, a community member affected by the Brumadinho dam collapse in Brazil in 2019, which killed 270 people (despite it being certified as safe by the local subsidiary of German company TÜV SÜD), took to the floor to say:

“We, communities affected by large multinational corporations, are in a hurry because we are dying. We don’t want to die. We need the international community to hold accountable those who are contaminating our water, air and soils and taking the lives of our brothers and sisters, and to ensure proper reparation.” 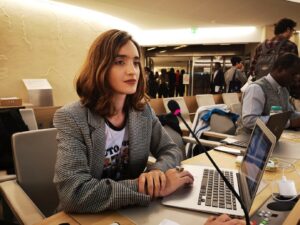 It was inspiring to work alongside Viviana, Marina and Father Vincent, to be in meetings with activists from all over the world, all united to call for “rules for corporations; rights for people,” and to speak in the same room as state representatives negotiating a Treaty that could be a gamechanger. If a strong text is agreed, it would address some of the inequalities in our global economic system, by regulating the activities of corporations active outside the territory of a state and ensuring that states’ legal systems work together to punish companies that harm human rights.

What I learned is that after eight years, there’s been a huge amount of progress (for instance, the question for most states now is not whether we need greater regulation – it’s about what it looks like) but we’re still far from seeing a Treaty agreed.

The process has become quite messy (more on that from CIDSE, here). One of the stock phrases of the week was: “Negotiations should be based on the third revised draft.” That’s because the Chair, Ecuador, had produced completely new proposals on some articles of the Treaty very late in the day, but it wasn’t clear where they were coming from, and this new text seems to be seriously watering down some of the key provisions of the Treaty that would enable affected communities to seek justice.

This is not uncommon for a Treaty process, as negotiating a consensus can be painfully slow. But the core challenge is that powerful states where transnational companies are based are trying to water down the process or refusing to engage.

Unfortunately, this includes the UK, who stated on the Monday that they wouldn’t be supporting the draft text and then did not engage in negotiations for the rest of the week. Nor did they respond to my requests to meet with the delegation. This is really disappointing – even the USA and the EU were at least in the room negotiating on the text and meeting with civil society. The UK seems to be on a completely different track: the wrong track.

In more positive news, there were strong calls from civil society and southern states, with Palestine most vocal, both on the content – to retain essential elements on access to justice and liability – and to keep the negotiations transparent and democratic.

CAFOD is clear that we need the UK to step up: to constructively negotiate for a strong Treaty that would provide justice to those affected by corporate abuse, and to put forward ambitious national legislation – a Business, Human Rights and Environment Act, which would be complementary to a UN Treaty. Otherwise, it risks being left behind by other states and becoming a laggard on business and human rights.

The time for a Treaty is now!