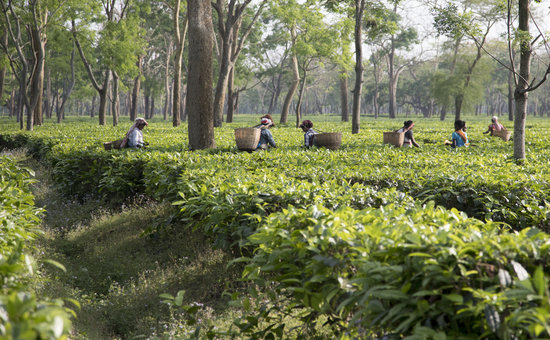 CORE Coalition, Accountability Counsel, Nazdeek, and other civil society organisations concerned about labour exploitation on Assam tea plantations are writing to 12 major British tea brands and retailers that source tea from Assam, urging them to use their purchasing power to help break the cycle of poverty wages.

Tea grown in Assam in North East India is a crucial ingredient in the English Breakfast blend that is enjoyed by thousands of British tea drinkers. But many consumers are unaware of the grim reality facing workers on tea estates in Assam.

Around one million tea workers, the majority of whom are women, endure back-breaking, long days in the harsh sun. For six days a week, tea workers have to pick 24 kilograms of tea leaf per day or face wage penalties. At the end of the day, they come home to dilapidated housing, dirty drinking water, and inadequate healthcare. Due to the absence of functioning toilets, many are forced to openly defecate, exacerbating disease. Malnutrition and infant mortality are disproportionately high, and literacy rates low. These conditions have been well documented by journalists and researchers.

At the root of workers’ poverty is their abysmally low wages, which trap them in a daily struggle to survive. Tea workers across the state of Assam earn only 167 rupees (less than £2) a day, barely enough to feed their families. As a result, workers and their advocates have been engaged in a long-running wage campaign calling for a wage of at least 350 rupees, including a letter sent to brands and retailers in 2016.

In a welcome move, the Government of Assam recently vindicated this campaign and proposed to increase the minimum wage to 351 rupees. Unfortunately, this was met with protest by the Assam tea industry, and the Assam labour department announced that a “one-member committee” would look into the industry’s objections.

Now, NGOs and trade unions are again asking the major tea buyers in the UK to urge their suppliers in Assam to respect the recent proposal by the Government of Assam to increase wages to 351 rupees and adopt purchasing practices that support that higher wage.

We are also asking British companies to urge their tea estate suppliers in Assam to provide civil society organisations with free access to workers for the purpose of rights training. Presently, plantation management often prevents groups from entering the areas in which tea workers live. Most workers are Adivasis (or Indigenous Peoples), whose forebears were forcefully brought to Assam from central India under British colonial rule in the 1800s. Marginalised from the Assamese population and dependent on their employers, these communities have little option but to work on the tea plantations generation after generation. Preventing workers’ access to legal literacy and other support only perpetuates this cycle of generational servitude.

UK tea brands and retailers that profit from the sale of Assam tea are tacitly profiting from a system that delivers poverty wages year after year. By taking pro-active steps to break this cycle, UK companies can instead distinguish themselves as ethical players in the global tea supply chain.

Anirudha Nagar is Asia Director at Accountability Counsel, which amplifies the voices of communities through non-judicial grievance mechanisms to protect their human rights and environment. Accountability Counsel is supporting local organisations that filed a complaint to the World Bank Group about poor living and working conditions on plantations in Assam owned by the World Bank and Tata Group.