Home > Uncategorised > What does 2019 hold for corporate accountability? > News 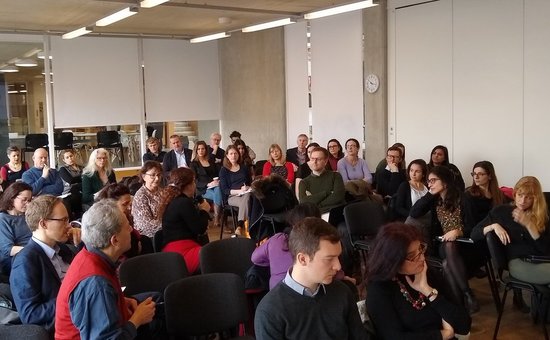 50 people from NGOs, academia and law firms gathered at The Foundry in London on Wednesday 13th February for CORE’s annual partners’ meeting. This blog gives a brief summary of the  wide-ranging presentations given on the day.

The keynote speech was delivered by Susi Bascon, Director of Peace Brigades International (PBI) UK. Susi spoke about the situation for HRDs fighting corporate abuses in 2019 and how we can support them. Between 2015 and 2017, on average one person was killed every day standing up for human rights, often while resisting agribusiness, mining and energy projects, or working to expose corruption.

Susi highlighted some of PBI’s key work over the last year: championing the nomination of the global community of HRDs for the 2018 Nobel Peace Prize, supporting activists in Honduras opposing the building of a hydroelectric dam, and hosting a consultation in Colombia for HRDs with law firm Simmons & Simmons to present a legal toolbox on business and human rights.

She reminded us of the importance of keeping HRDs and affected communities at the centre of our work on business and human rights.

Our first panel discussion was on recent parent company liability cases. Tim Cooke-Hurle, a barrister at Doughty Street Chambers, gave a summary of three UK cases brought by communities in Nigeria, Kenya and Zambia against multinationals Shell, Unilever and Vedanta.

While the Shell and Unilever cases faltered in the Court of Appeal, the Vedanta claimants were successful, but the company appealed to the UK’s Supreme Court. The decision, expected in 3-6 months, will be pivotal for future prospects of holding companies legally accountable for human rights and environmental abuses.

In Germany, a court recently rejected a lawsuit against discount retailer KiK for its responsibility for a devastating factory fire that claimed the lives of over a hundred workers in Pakistan.  Carolijn Terwindt of the European Center for Constitutional & Human Rights (ECCHR) explored the way forward and proposed that Germany needs new legislation on supply chain liability.

Looking at other avenues to hold European companies accountable for their overseas abuses, Anneke Van Woudenberg, Director of RAID, discussed the UK’s Compensation Principles in Overseas Corruption Cases. The Principles commit UK enforcement agencies such as the Serious Fraud Office to work to identify victims of corruption, assess the case and obtain evidence for compensation. RAID is currently working on having the Principles applied in a corruption case in Tanzania.

Momentum for human rights due diligence across Europe

The 2017 French Duty of Vigilance law established an obligation on large multinationals to identify and prevent human rights and environmental abuses arising from their activities and those of their subsidiaries, subcontractors and suppliers. The French campaign and subsequent victory have inspired activists across Europe to press for legislation to mandate human rights due diligence (HRDD) in the global operations and value chains of businesses.

A round-up of current developments was given by Adriana Espinosa, Policy Officer at the European Coalition for Corporate Justice (ECCJ). Anina Dalbert of the Swiss Coalition for Corporate Justice presented progress on the Swiss Responsible Business Initiative, a legislative proposal for parent company liability for human rights abuses. A counter-proposal to the Initiative is currently in discussion in the Swiss Parliament.

Many other countries have also seen legislative or campaign developments on HRDD, including Finland. Over 50 organisations launched the #Ykkösketjuun campaign (an ice hockey term meaning the “first line”) in September 2018. Anu Kultalahti, from Finnwatch, explained how the campaign had snowballed since then: almost 130 NGOs, trade unions and companies have joined up, nearly 200 election candidates have signed the pledge and four political parties have confirmed their support.

Human rights and the environment: two sides of the same coin

The next panel highlighted the interdependence of human rights and the environment when it comes to corporate accountability. First, we heard from Julia Christian, forests campaigner at Fern. The top driver of deforestation is now agriculture and Europeans have the biggest deforestation footprint per capita in the world. Fern is calling for new European regulation to stop deforestation in business supply chains, and reinforcing calls for mandatory HRDD in business supply chains and operations.

Finally, Benjamin Hitchcock Auciello, who has worked for the Gaia Foundation and London Mining Network, explored how corporate accountability strategies could fit within an economic transition away from fossil fuels. (Here’s an article Benjamin wrote last year about a small Colombian town’s success in stopping a mega-mine).

There has been a recent flurry of articles on “corporate purpose,” with the world’s biggest investor Larry Fink using his annual letter to CEOs to tell them that “purpose” is the animating force for profits. Using this as a launchpad, the final panel discussed whether “purpose” is more than just jargon. Are companies stepping up to the plate or running scared of regulation and real accountability?

In a lively and engaging debate with the audience, chaired by Mustafa Quadri (Equidem), four academics and practitioners – Dr Tara Van Ho (University of Essex), John Morrison (Director, Institute for Human Rights and Business), Prof. Lorraine Talbot (University of Birmingham) and Henry Richards (Project Manager, Future of the Corporation at the British Academy) – explored these issues.

Some saw the purpose debate as a useful launchpad to engage companies on their business and human rights policies. Many others felt that the “purpose paradigm” is really about doing the right thing only when it benefits the business bottom line: profit. Corporate “purpose” could be distracting attention from regulatory initiatives, such as ensuring companies pay their taxes and are held legally accountable for wrongdoing.

After this intensive conclusion(!), we closed the day with networking over a glass of a wine. We wish to thank all the speakers for taking the time to prepare such stimulating presentations. Please contact us if you’d like any further information about the topics covered. Given the growing levels of interest in corporate accountability, we plan to explore how to open future meetings to a wider audience.